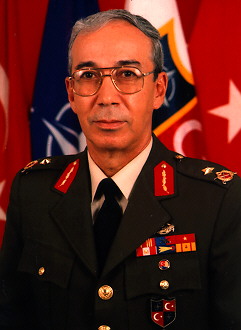 Brigadier General M. Mehmet Karatas was born in Istanbul in 1946. After graduating from the Land Forces Academy as an infantry officer in 1967, he served as platoon leader and company commander in various units and as Section Chief, Operations in regimental headquarters.

General Karatas graduated from the Army Staff College in 1979 and served as Plans Officer, Operations Division, Headquarters Turkish First Army through 1985. General Karatas completed his studies at the NATO Defence College in Rome, Italy the same year and was assigned as a staff officer with Exercise Branch, Operations Division, Headquarters, Allied Forces Southern Europe, Naples, Italy where he served through 1988.

Between 1988 and 1992, General Karatas served at the Ministry of National Defence (MOD, TU), initially as the Private Secretary to the Minister, then as Chief, NATO Agreements Branch, General Plans and Policy Division. He was assigned as an Armoured Brigade Deputy Commander in 1992.

General Karatas was assigned as commander to a commando regiment in early 1994. He was promoted to the rank of Brigadier General effective 30 August 1995 and served as an Infantry Brigade Commander from 1995 to 1997.

On 25 August 1997 he assumed his present duty as Deputy Chief of Staff, Plans and Operations, HQ LANDSOUTHEAST.

Brigadier General Karatas is married to Mrs. Ayse Karatas and they have a son named Hakan and a daughter named Duygu.